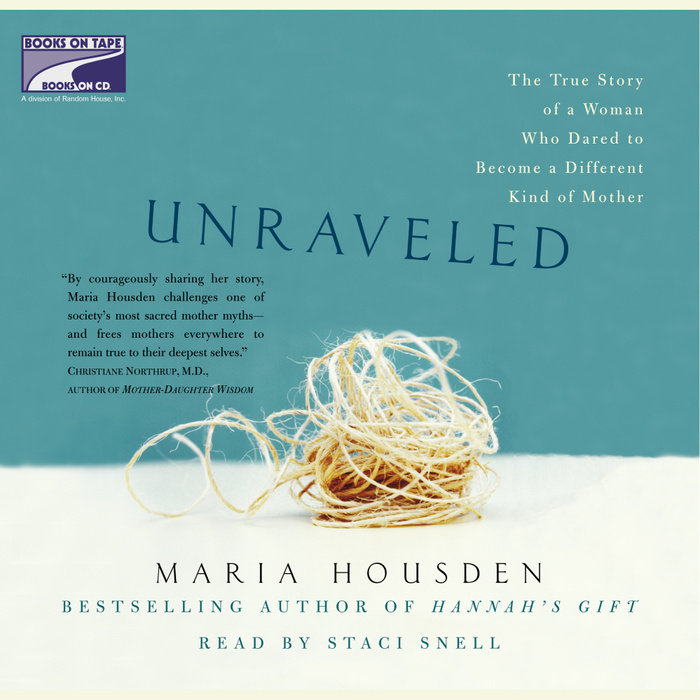 1. Before you started reading Unraveled, did you have an opinion of the author based solely on the fact that she gave up primary custody of her children? Why? Has that opinion changed now that you’ve read her book?

2. Discuss the prefatory poem by Stanley Kunitz. Why do you think Maria Housden selected it? In what ways does it apply to your own experience?

3. In a note on page xiv, Housden says: “The quotation marks positioned around the story are intentional, an offering to the way all our stories are simply one version of what happened, no better or worse, truer or less true, than anyone else’s memory or recollection.” What do you think of this premise? Did it affect your interpretation of the book? How so? What story do you think her son Will might tell? Claude?

4. On page 37, Housden says, “Although being a mother felt the most natural thing to me, whenever I compared myself to others, I felt an odd sort of anxiety that I wasn’t doing it the way it was supposed to be done.” Have you ever felt this way–about motherhood, your job, or some other important issue in your life? What did you do about it? What did Housden do about it?

5. Throughout the first section of the book, Housden mentions her acute sensitivity to what others think of her, of her mothering skills, of her marriage, but by the second half she has found an inner strength that permits her to live by her own rules. What do you think caused this shift? Is it something we can control, or is it a matter of personal growth and experience?

6. There are several key events in Housden’s first marriage–the violent incident in the family room, the death of their young daughter–that are touched on again and again in her book. She even appears to believe they are linked in some way. How did they change her as a mother? How did they contribute to her decision to leave her children behind?

7. When Housden goes to the retreat, she finds herself thinking things like “Except for the fact that my kids were not here, it was, for me, a perfect day” (page 71). At what point does it become clear that she truly enjoys her life without her children present? Can you identify a specific turning point?

8. Housden jumps around in time throughout the book, interspersing scenes from the early days of her first marriage, Hannah’s illness, and her retreat, for example. What effect does this have on you, the reader? How does it expand your understanding of the decisions Housden makes?

9. What role does fate play in this story? Housden writes of Roger on pages 109-110: “What now seemed even more peculiar, or perhaps magical, was how each of us had ended up here during the same week…. I could not ignore the synchronicity that had made our visits overlap; nor could I stop my mind from wondering what it might mean.” Do you believe in synchronicity as she describes it? Is it possible that synchronicity is where we find it–that if we believe an event has significance, then it does?

10. Housden describes her behavior in her first marriage in terms of selflessness and self-sacrifice: “I often willed my body not to need anything. Distracted by my compulsion to take care of everyone and everything else, I often forgot to eat, refused to sit down, and willed myself not to have to go to the bathroom for hours” (pages 111-112). But some would say her decision to relinquish custody of her children was supremely selfish. Do you think it was? Can you understand how years of selflessness might lead a woman to such an uncommon decision? Did the fact that it was her ex-husband’s idea change your opinion?

11. Although Housden gave up primary custody of her children, her life remained entwined with theirs, with no apparent detriment to the children. In many ways, it hardly seemed like she left them at all. Did this outcome surprise you?

12. What did you think of the reaction of Housden’s friends to her decision? For example, on page 192, her friend Kim says: “What makes you think you’re so special? Don’t you think all of us are tired and bored with our lives at times? We’re sticking it out, though. Why can’t you?” What made Kim lash out this way? If you were in Kim’s place, how would you have responded? Do you know any women who have done what Housden did?

13. When Housden finally does leave, on page 202, she says: “The weight of my body felt impossibly heavy, and yet I also felt lighter and free in a way I would have been ashamed to admit out loud.” How do you think you would feel in her shoes?

14. While struggling with the idea of moving cross-country to be with Roger, Housden has a conversation with her father that takes her by surprise (page 225). What did you think of his proclamation? What advice would you have given if she were your daughter?

15. After Will has his accident, on page 243, Housden writes, “I felt impotent as a mother, useless and irresponsible. I should have been there.” On the one hand, this reaction seems perfectly natural, but on the other, until now she hadn’t shown any signs of regret. Were you surprised when she and Roger decided to move back to the east coast? Were you pleased or disappointed?

16. Toward the end of the book, on page 263, Housden writes, “I had turned a corner, somewhere along the line, and knew that my life was now all about permission–permission to be imperfect, to make mistakes, to be afraid.” Who grants this permission? Do you feel that you have similar permission in your own life?