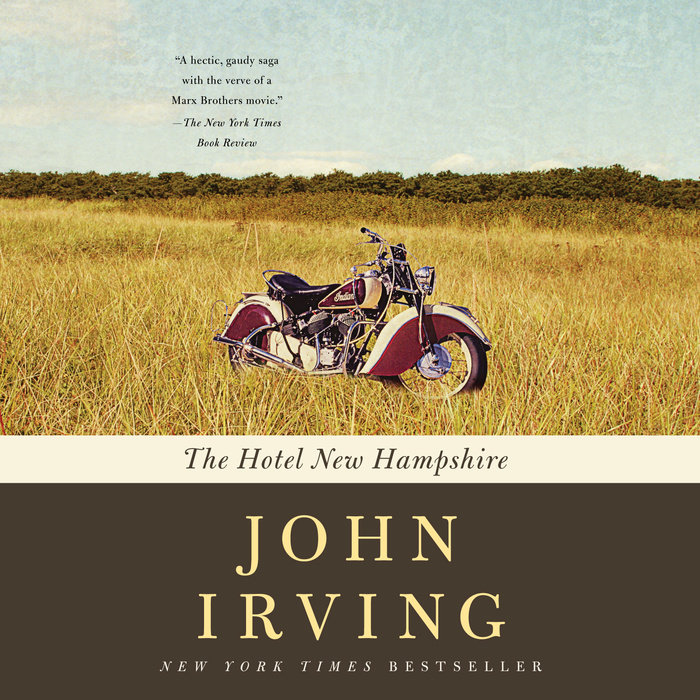 1. When Freud gives his blessing to John's mother and father in 1939 at Arbuthnot-by-the-Sea, he tells Mother, "Forgive him, even though it will cost you." What do you think Freud was referring to? A specific event or Father's lifelong dreaminess?

2. Irving frequently gives the reader an important piece of information (such as that the Mercedes in front of the Vienna Hotel was a bomb) then unspools in detail the lead-up to the action. Did you find this to be an effective method of engaging the reader? Can you think of other authors who use a similar narra-tive technique?

3. John and Franny's love for each other form the novel's sometimes tense but always solid core. As you read, how did you expect Irving to resolve the sexual attraction? How did John's acceptance of his feelings for Franny affect your view of their relationship?

4. The author and the first-person protagonist are both named John. John is also the protagonist's name in Irving's A Prayer for Owen Meany. What do you think this name choice says about the author's intentions for the fictional John?

5. Sorrow the dog is far more potent in death than he was in life; a harbinger, if not an actual instrument, of doom for Iowa Bob, John's romp with Bitty Tuck, and Mother and Egg. When Frank and John see Susie the bear in Franny's room, they imagine that she looks like Sorrow and may be Sorrow in disguise. Do you think Susie reflects Sorrow or is she an agent of fortune for the family? Did the later appearance of Seeing Eye dogs make you wonder if Sorrow had resurfaced?

6. Win Berry says that Earl/State o' Maine was "too old to be a bear anymore," and later Freud writes, "A smart bear makes all the difference." Ironically, the old bear is the actual bear, while the smart bear is a vulnerable, angry woman. What characteristics does Irving associate with being a successful bear? Do you think that Susie eventually incorporates her bear exterior into her interior self?

7. Several themes are threaded through The Hotel New Hampshire, such as Sorrow as doom and the strength of bears. What other images, themes, or phrases did you find repeated in the story? If you've read other novels or stories by John Irving, discuss any themes that are common to those works and The Hotel New Hampshire.

8. With the exception of John's mother, nearly all the women in this novel take money for sex, have been raped, or seem asexual. Why do you think the author created his characters this way? How do the women characters' sexual experiences compare to the men's? Do these women's sexuality propel the story as much as Win Berry's dreams?

9. After their mother and Egg die, Franny tells her surviving siblings, "From now on, I'm mainly a mother.... The shit detectors are gone, so I'm left to detect it. I point out the shit--that's my role." Do you think this was their mother's role--and every mother's role? Does Franny do a good job being a mother? In what ways does she succeed or fail?

10. While in Vienna, Win Berry's children often agree that their father is "blind" long before he literally is. Do you think Win Berry's physical blindness "opened his eyes"? How much of his personality seems to be his own and how much of it is Freud's? After becoming a blind hero in Vienna, does Win veer closer to becoming like Freud or does he start treading his own path?

11. Why do the old whore and the old radical have the same name, Old Billig? Why are they referred to as billig, or "cheap"?

12. Do you see the years spent in Vienna as a time of metamorphosis or a time of hibernation for the Berrys? Who changes the most during that time?

13. When John ponders how little he knows about Vienna after living there for seven years, he thinks, "I knew about my family, I knew about our whores, and our radicals; I was an expert on the Hotel New Hampshire and an amateur at anything else." Does the focus on the family expand or stunt the individual growth of the Berry family members? At the end, do you think that John has, in essence, made a career of being an expert on the Hotel New Hampshire?

14. "Keep passing the open windows" is a common refrain among the Berrys. Did you suspect that one family member would fail to do this, and did you guess who it would be?

15. In examining the motivation of blowing up the Opera, John thinks, "The terrorist and the pornographer are in it for the means. The means is everything for them." Do you agree? Do you think pornographers and terrorists have the same internal drive?

16. If you could read the story of the Berry family from the point of view of another character, who would you choose and why?