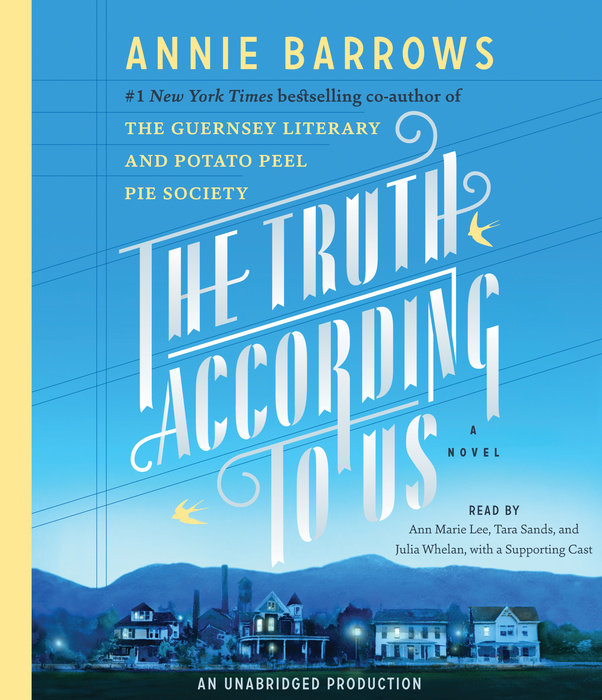 The Truth According to Us

2. Much of the story of The Truth According to Us revolves around events that occurred when Jottie, Felix, Vause, and Sol were children and teenagers. Do you think the author believes that character is essentially unchanging from childhood to adulthood? Do you agree? Have you changed in essence from your childhood self?

3. The Truth According to Us is set in a small town where everyone seems to know everyone else. Have you ever lived in a situation like that? Would you find living in Macedonia appealing or stifling? With our multiple forms of instantaneous communication, it could be said that the entire world has become a small town. Do you agree? Do you think we live in a more or less anonymous world now?

4. Felix Romeyn is undoubtedly a flawed character. Sol McKubin is, by most standards, a far more honorable person. And yet Jottie speaks of “her growing certainty that if Sol had been in Felix’s place, he would, after a time, have come to believe that what he told her was the truth.” Do you agree? If so, which man is more honorable?

5. Of all the characters in The Truth According to Us, Layla Beck may be the one that changes the most. In her final letter to her father, she says that she’s learned that “ignoring the past is the act of a fool.” What is she referring to? Discuss how the lessons she’s learned are revealed in the differences between her relationships with Felix and with Emmett.

6. While The Truth According to Us is not an epistolary novel, many letters from Layla’s various correspondences are woven throughout the narrative. How did these letters contribute to your understanding of her character, and to the story as a whole? Are there any letters that really stand out in your memory? Why do you think that is?

8. Annie Barrows has said, with regard to setting her novel in 1938, “The Second World War looms so large in our perception of our individual selves—-and even larger in our perception of America’s identity—-that it takes a massive feat of imagination to remove it, or block it out, even very temporarily. To catch a glimpse of a small town in America, not ‘before the war,’ or even ‘before people realized war was inevitable,’ but without the inevitability—-well, it’s nearly impossible.” Discuss the historical events that have marked your time. Do you think that we, like the characters in The Truth According to Us, face a major pivot point in our national identity? What do you think it is?

9. At one point, Willa’s uncle Emmett advises her, “Don’t ask questions if you’re not going to like the answers.” He clarifies that she should ask herself whether the answer could endanger something that’s precious to her, and if so, refrain from asking. Willa ignores his advice entirely, but would it have been better—-for her and everyone else—-if she had taken it? Have you ever regretted your own curiosity?

10. The possibility of knowing the truth about the past is a central preoccupation of The Truth According to Us. Layla says that “if history were defined as only those stories that could be absolutely verified, we’d have no history at all.” Do you agree? Do you think that Layla still believes this at the end of the summer?

11. Of all the characters in The Truth According to Us, with whom do you most identify and why?

12. The sisterly bond between Jottie, Mae, and Minerva is intimate and powerful, with Mae and Minerva choosing to live under the same roof during the week, away from their husbands, because “the two of them can’t stand to be apart. . . . They found out they were miserable without each other.” In contrast, the relationship between the two Romeyn brothers is tense. What do you think of this distinction? How does the presence of strong feminine companionship impact this story? How does this model of loyalty and devotion affect the relationship between young Willa and Bird?

13. The Truth According to Us is broken up into multiple different perspectives, blending young and old voices with epistolary fragments and flashbacks. How do these varied viewpoints contribute to characterization and development in the story? How do they deepen our connection to these characters?