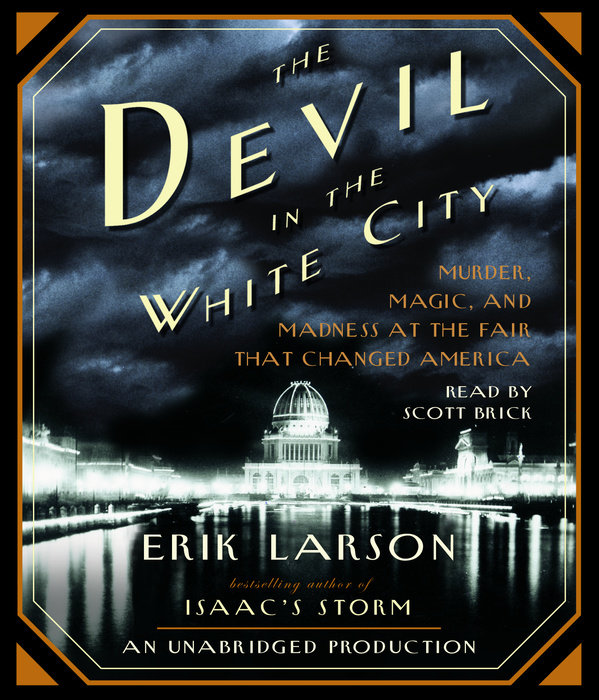 The Devil in the White City

1) In the note “Evils Imminent,” Erik Larson writes “Beneath the gore and smoke and loam, this book is about the evanescence of life, and why some men choose to fill their brief allotment of time engaging the impossible, others in the manufacture of sorrow” [xi]. What does the book reveal about “the ineluctable conflict between good and evil”? What is the essential difference between men like Daniel Burnham and Henry H. Holmes? Are they alike in any way?

2) At the end of The Devil in the White City, in Notes and Sources, Larson writes “The thing that entranced me about Chicago in the Gilded Age was the city’s willingness to take on the impossible in the name of civic honor, a concept so removed from the modern psyche that two wise readers of early drafts of this book wondered why Chicago was so avid to win the world’s fair in the first place” [p. 393]. What motives, in addition to “civic honor,” drove Chicago to build the Fair? In what ways might the desire to “out-Eiffel Eiffel” and to show New York that Chicago was more than a meat-packing backwater be seen as problematic?

3) The White City is repeatedly referred to as a dream. The young poet Edgar Lee Masters called the Court of Honor “an inexhaustible dream of beauty” [p. 252]; Dora Root wrote “I think I should never willingly cease drifting in that dreamland” [p. 253]; Theodore Dreiser said he had been swept “into a dream from which I did not recover for months” [p. 306]; and columnist Teresa Dean found it “cruel . . . to let us dream and drift through heaven for six months, and then to take it out of our lives” [p. 335]. What accounts for the dreamlike quality of the White City? What are the positive and negative aspects of this dream?

4) In what ways does the Chicago World’s Fair of 1893 change America? What lasting inventions and ideas did it introduce into American culture? What important figures were critically influenced by the Fair?

5) At the end of the book, Larson suggests that “Exactly what motivated Holmes may never be known” [p. 395]. What possible motives are exposed in The Devil in the White City? Why is it important to try to understand the motives of a person like Holmes?

6) After the Fair ended, Ray Stannard Baker noted “What a human downfall after the magnificence and prodigality of the World’s Fair which has so recently closed its doors! Heights of splendor, pride, exaltation in one month: depths of wretchedness, suffering, hunger, cold, in the next” [p. 334]. What is the relationship between the opulence and grandeur of the Fair and the poverty and degradation that surrounded it? In what ways does the Fair bring into focus the extreme contrasts of the Gilded Age? What narrative techniques does Larson use to create suspense in the book? How does he end sections and chapters of the book in a manner that makes’ the reader anxious to find out what happens next?

7) Larson writes, “The juxtaposition of pride and unfathomed evil struck me as offering powerful insights into the nature of men and their ambitions” [p. 393]. What such insights does the book offer? What more recent stories of pride, ambition, and evil parallel those described in The Devil in the White City?

8) What does The Devil in the White City add to our knowledge about Frederick Law Olmsted and Daniel Burnham? What are the most admirable traits of these two men? What are their most important aesthetic principles?

9) In his speech before his wheel took on its first passengers, George Ferris “happily assured the audience that the man condemned for having ‘wheels in his head’ had gotten them out of his head and into the heart of the Midway Plaisance” [p. 279]. In what way is the entire Fair an example of the power of human ingenuity, of the ability to realize the dreams of imagination?

10) How was Holmes able to exert such power over his victims? What weaknesses did he prey upon? Why wasn’t he caught earlier? In what ways does his story “illustrate the end of the century” [p. 370] as the Chicago Times-Herald wrote?

11) What satisfaction can be derived from a nonfiction book like The Devil in the White City that cannot be found in novels? In what ways is the book like a novel?

12) In describing the collapse of the roof of Manufacturers and Liberal Arts Building, Larson writes “In a great blur of snow and silvery glass the building’s roof—that marvel of late nineteenth-century hubris, enclosing the greatest volume of unobstructed space in history—collapsed to the floor below” [p. 196–97]. Was the entire Fair, in its extravagant size and cost, an exhibition of arrogance? Do such creative acts automatically engender a darker, destructive parallel? Can Holmes be seen as the natural darker side of the Fair’s glory?

13) What is the total picture of late nineteenth-century America that emerges from The Devil in the White City? How is that time both like and unlike contemporary America? What are the most significant differences? In what ways does that time mirror the present?