Emmy Award winner Kevin Bleyer is an Emmy Award–winning writer for The Daily Show with Jon Stewart, for which he has won multiple Emmy Awards. Before rewriting the Constitution, Bleyer co-authored the #1 New York Times bestseller Earth: The Book, and negotiated bipartisan consensus as a writer and producer for Politically Incorrect with Bill Maher and Dennis Miller. And he is a term member of the Council on Foreign Relations, so he secretly runs the government already. He lives in New York, where he regularly poses for portraits. 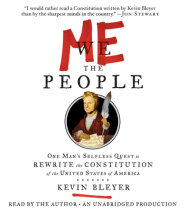 audio
Me the People
Author: Kevin Bleyer | Narrator: Kevin Bleyer
Release Date: May 29, 2012
The United States Constitution promised a More Perfect Union. It’s a shame no one bothered to write a more perfect Constitution—one that didn’t trigger more than two centuries of arguments about what the darn thing actually says....
ABOUT THIS AUDIOBOOK
$22.50
ISBN: 9780449009147
Unabridged Download 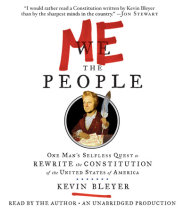