Roger Lowenstein, author of the bestselling Buffett: The Making of an American Capitalist, reported for The Wall Street Journal for more than a decade, and wrote the Journal's stock market column, Heard on the Street, from 1989 to 1991 and the Intrinsic Value column from 1995 to 1997. He now writes a column in Smart Money magazine, and has written for the New York Times and The New Republic, among other publications. Lowenstein has three children and lives in Westfield, New Jersey. 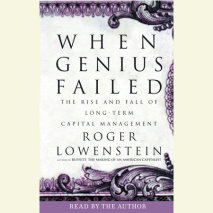 When Genius Failed
Author: Roger Lowenstein | Narrator: Roger Lowenstein
Release Date: September 04, 2001
John Meriwether, a famously successful Wall Street trader, spent the 1980s as a partner at Salomon Brothers, establishing the best--and the brainiest--bond arbitrage group in the world. A mysterious and shy midwesterner, he knitted together a group o...
ABOUT THIS AUDIOBOOK
$14.96
ISBN: 9780375418563
Abridged Download 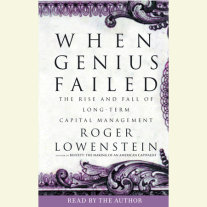