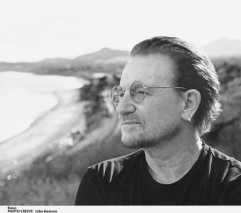 Bono
The lead singer of U2, Bono was born Paul David Hewson in Dublin. He met The Edge, Larry Mullen Jr., and Adam Clayton at school, and in 1978, U2 was formed. The band released their first album, Boy, on Island Records in 1980 and to date have released a total of fourteen studio albums that have sold 157 million copies worldwide. Heralded by Rolling Stone as “a live act simply without peer,” the band’s record-breaking 360° Tour (2009–2011) remains the highest-grossing concert band tour of all time. U2 have won numerous awards, including twenty-two Grammys, more than any other duo or group, as well as an Academy Award nomination and the Amnesty International Ambassador of Conscience Award. In 2005, U2 was inducted into the Rock & Roll Hall of Fame.

Alongside his role in U2, Bono is a ground-breaking activist. A leader in Jubilee 2000’s Drop the Debt campaign, he next took on the fight against HIV/AIDS and extreme poverty, co-founding sister organizations ONE and (RED). ONE is a movement of millions of people dedicated to the fight against extreme poverty and preventable disease. With ONE, Bono has lobbied heads of state and legislatures all around the world, helping to ensure the passage of programs, such as the U.S. PEPFAR AIDS program, that have helped to save tens of millions of lives over the past twenty years. (RED)—which partners with companies to raise public awareness about, and corporate contributions for, the AIDS crisis—has to date generated more than $700 million for the Global Fund to treat and prevent AIDS in Africa. Since 2020, ONE and (RED) have also been fighting COVID-19 and its impact on the developing world.

Bono has received a number of awards for his music and activism, including the Freedom of the City of Dublin (with U2), Chile’s Pablo Neruda Medal of Honor, the Légion d’honneur from the French government, an honorary British knighthood, the Fulbright Prize for International Understanding, and TIME magazine’s Person of the Year (along with Bill and Melinda Gates). He lives in Dublin with his wife, Ali Hewson.
Read More +
1 results   page 1 of 1   view sort by 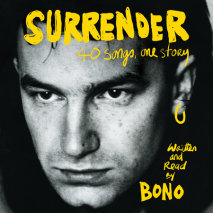 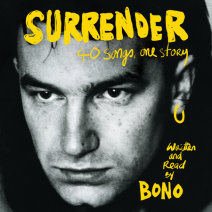