Emily Nussbaum has written for The New Yorker since 2011. She is the winner of the 2014 ASME for Columns and Commentary and the 2016 Pulitzer Prize for criticism. Previously, she was the TV critic and editor of the The Culture Pages for New York magazine, where she created the "Approval Matrix," the playful culture charticle that to this day closes out each issue of New York. Nussbaum has previously written for The New York Times, Slate, and Lingua Franca. She is the author of I Like to Watch, which was a finalist for the PEN/Diamonstein-Spielvogel Award for the Art of the Essay. She lives in Brooklyn with her husband Clive Thompson and their two children. 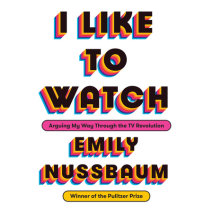 audio
I Like to Watch
Author: Emily Nussbaum | Narrator: Emily Nussbaum
Release Date: June 25, 2019
From The New Yorker’s fiercely original, Pulitzer Prize-winning culture critic, a provocative collection of new and previously published essays arguing that we are what we watch.“Emily Nussbaum is the perfect critic—smart, enga...
ABOUT THIS AUDIOBOOK
$22.50
ISBN: 9781984841278
Unabridged Download 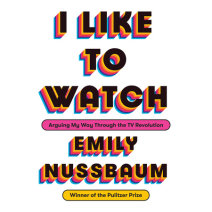