Wendy Mitchell was diagnosed with Alzheimer’s disease in July 2014 at the age of fifty-eight. She continued to work as an administrator for the British National Health Service until March 2015, when she retired to live “happily alone.” She now writes a popular blog about the experience of living with early-onset dementia called “Which me am I today?” She has been profiled on BBC news, and for two awareness-raising videos, one for the Alzheimer’s Society in the UK and one by Women & Home magazine. The single mother of two adult daughters, she lives in Yorkshire, England. 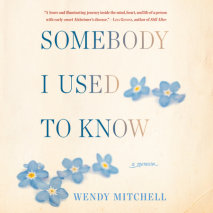 audio
Somebody I Used to Know
Author: Wendy Mitchell | Narrator: Wendy Mitchell
Release Date: June 05, 2018
“A brave and illuminating journey inside the mind, heart, and life of a person with early-onset Alzheimer’s disease.”—Lisa Genova, author of Still Alice Wendy Mitchell had a busy job with the British National Health Service, r...
ABOUT THIS AUDIOBOOK
$20
ISBN: 9780525593621
Unabridged Download 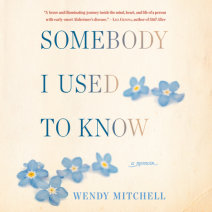