Brant Pinvidic is an award-winning film director, veteran television producer, C-level sales and presentation coach, host of the top-rated podcast "Why I'm Not...", and a columnist for Forbes. He has been named to the Hollywood Reporter's 30 Most Powerful Reality TV Sellers and is widely recognized as one of the great creative sales leaders in Hollywood. Pinvidic grew up in Canada as a serial entrepreneur before moving to the entertainment industry. His endless energy, quest for adventure, and the 3-Minute Rule have helped make him one of the most sought after C-level consultants in the USA and abroad. He lives in Southern California with his wife and three children. 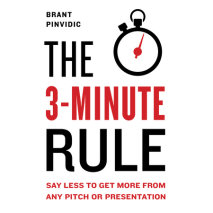 audio
The 3-Minute Rule
Author: Brant Pinvidic | Narrator: Brant Pinvidic
Release Date: October 29, 2019
Want to deliver a pitch or presentation that grabs your audience’s ever-shrinking attention span? Ditch the colorful slides and catchy language. And follow one simple rule: Convey only what needs to be said, clearly and concisely, in three minu...
ABOUT THIS AUDIOBOOK
$15
ISBN: 9780593148495
Unabridged Download 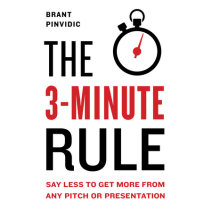