Hannah Gadsby stopped stand-up comedy in its tracks with her multi-award-winning show Nanette, which played to sold-out houses in Australia, the UK, and New York. Its launch on Netflix, and subsequent Emmy and Peabody wins, took Nanette (and Hannah) to the world. Hannah’s difficult second album (which was also her eleventh solo show) was named Douglas, after her dog. Hannah walked Douglas around the world, selling out and scoring another Emmy nomination. Before all of this, Hannah appeared as a character called Hannah in Please Like Me (Hulu) and toured her native Australia and the UK as a stand-up comedian. She made art documentaries and did plenty of other things over the course of more than a decade in comedy, but that will do for now. 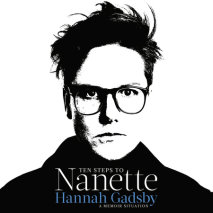 audio
Ten Steps to Nanette
Author: Hannah Gadsby | Narrator: Hannah Gadsby
Release Date: March 29, 2022
NEW YORK TIMES BESTSELLER • Multi-award-winning Hannah Gadsby broke comedy with her show Nanette when she declared that she was quitting stand-up. Now she takes us through the defining moments in her life that led to the creation of Nanette and ...
ABOUT THIS AUDIOBOOK
$22.50
ISBN: 9780593210147
Unabridged Download 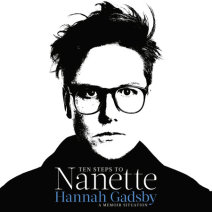