Miguel Sancho is an Emmy Award-winning television producer currently show-running and developing series and specials for A&E. For seven years he helped run the ABC primetime news magazine 20/20. Prior to that, he was an investigative producer at 20/20 and CBS News's 48 Hours. He lives in New York with his wife, Felicia Morton, and their two children, Lydia and Sebastian. 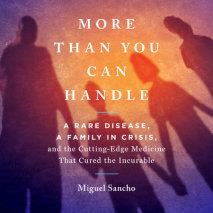 audio
More Than You Can Handle
Author: Miguel Sancho | Narrator: Miguel Sancho
Release Date: March 02, 2021
The personally harrowing and medically enthralling story of a family's struggle to save a child from a deadly immune deficiency.A journey through the deepest valleys and highest peaks of parenting. When a two-month-old baby falls ill, his apparently ...
ABOUT THIS AUDIOBOOK
$20
ISBN: 9780593344958
Unabridged Download 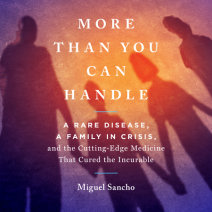