Seamus Heaney was born in County Londonderry, Northern Ireland. Death of a Naturalist, his first collection of poems, appeared in 1966, and was followed by poetry, criticism, and translations, which established him as the leading poet of his generation. In 1995, he was awarded the Nobel Prize in Literature, and twice won the Whitbread Book of the Year, for The Spirit Level (1996), and Beowulf (1999). Stepping Stones, a book of interviews conducted by Dennis O’Driscoll, appeared in 2008; Human Chain, his last volume of poems, was awarded the 2010 Forward Prize for Best Collection. He died in 2013. 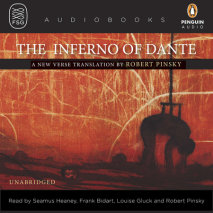 The Inferno of Dante
Author: Dante Alighieri | Narrator: Frank Bidart, Seamus Heaney and Louise GlĂĽck
Release Date: July 17, 2014
Robert Pinsky's new verse translation of the Inferno makes it clear to the contemporary listener, as no other in English has done, why Dante is universally considered a poet of great power, intensity, and strength. This critically acclaimed translati...
ABOUT THIS AUDIOBOOK
$15
ISBN: 9780698186149
Unabridged Download 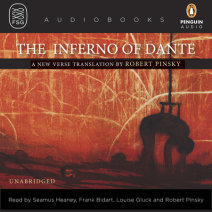 Stepping Stones
Author: Seamus Heaney | Narrator: Seamus Heaney
Release Date: June 01, 1996
Recipient of the 1995 Nobel Prize in Literature, poet Seamus Heaney brings beautiful focus to life in Ireland. Through his poetry, he encapsulates the country’s historical and political details while connecting it to the personal lives of the c...
ABOUT THIS AUDIOBOOK
$4
ISBN: 9781101082423
Abridged Download