Atossa Leoni is an internationally recognized actress of the stage and screen. She was born in Germany, has lived in Italy, and went to school in the United States, and is fluent in five languages. She made her American film debut in The Kite Runner in 2007. The books she has narrated include Stones into Schools and Three Cups of Tea, both by Greg Mortenson. 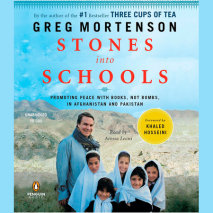 Stones into Schools
Author: Greg Mortenson | Narrator: Atossa Leoni
Release Date: December 01, 2009
From the author of the #1 bestseller Three Cups of Tea, the continuing story of this determined humanitarian’s efforts to promote peace through educationIn this dramatic first-person narrative, Greg Mortenson picks up where Three Cups of Tea le...
ABOUT THIS AUDIOBOOK
$25
ISBN: 9781101145876
Unabridged Download 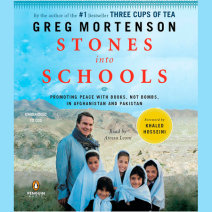 Three Cups of Tea
Author: Greg Mortenson and David Oliver Relin | Narrator: Vanessa Redgrave and Atossa Leoni
Release Date: January 22, 2009
This young readers edition of the worldwide bestseller Three Cups of Tea has been specially adapted for younger readers and updated by Greg Mortenson to bring his remarkable story of humanitarianism up to date for the present.
ABOUT THIS AUDIOBOOK
$12.50
ISBN: 9781101015117
Unabridged Download