Mitch Albom is the author of numerous books of fiction and nonfiction, which have collectively sold more than forty million copies in forty-seven languages worldwide. He has written seven number-one New York Times bestsellers, award-winning TV films, stage plays, screenplays, a nationally syndicated newspaper column, and a musical. He founded and oversees SAY Detroit, a consortium of nine different charitable operations in his hometown, including a nonprofit dessert shop and food product line to fund programs for Detroit’s neediest citizens. He also operates an orphanage in Port-Au-Prince, Haiti. He lives with his wife, Janine, in Michigan. 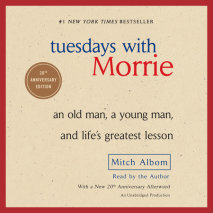 audio
Tuesdays with Morrie
Author: Mitch Albom | Narrator: Mitch Albom
Release Date: June 01, 2004
Maybe it was a grandparent, or a teacher, or a colleague.  Someone older, patient and wise, who understood you when you were young and searching, helped you see the world as a more profound place, gave you sound advice to help you make your...
ABOUT THIS AUDIOBOOK
$9.95
ISBN: 9780739311134
4 Unabridged CDsUnabridged Download 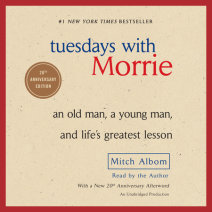