David Bianculli is a guest host and TV critic on NPR’s Fresh Air with Terry Gross. A contributor to the show since its inception, he has been a TV critic since 1975. From 1993 to 2007 Bianculli was a TV critic for the New York Daily News. He has written three other books: Dangerously Funny: The Uncensored Story of The Smothers Brothers Comedy Hour, Teleliteracy: Taking Television Seriously, and Dictionary of Teleliteracy: Television's 500 Biggest Hits, Misses, and Events. An associate professor of TV and film at Rowan University in New Jersey, Bianculli is also the founder and editor of the online magazine TVWorthWatching.
www.tvworthwatching.com 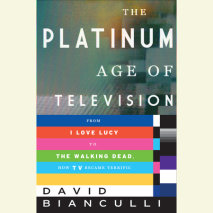 audio
The Platinum Age of Television
Author: David Bianculli | Narrator: David Bianculli
Release Date: November 15, 2016
Television shows have now eclipsed films as the premier form of visual narrative art of our time. This new book by one of our finest critics explains—historically, in depth, and with interviews with the celebrated creators themselves—how ...
ABOUT THIS AUDIOBOOK
$30
ISBN: 9780735285224
Unabridged Download 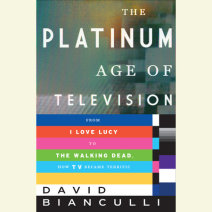