Ernestine Gilbreth Carey was an American author, who recorded her upbringing as one of 12 children in a comedic memoir, cowritten with her younger brother Frank, entitled Cheaper by the Dozen. The book was adapted into several films, a stage play, and a musical. She died in 2006. 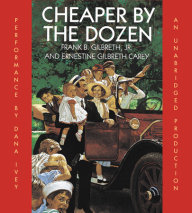 Cheaper By the Dozen
Author: Frank B. Gilbreth | Narrator: Ernestine Gilbreth Carey and Dana Ivey
Release Date: September 23, 2003
Count 'em–a dozen carrot topped, freckle-faced kids. Dad, a jovial optimist, successful inventor and efficiency expert is fond of doing his work at home. Mom, a psychologist, is busy putting everything she knows into practice.Listen along and d...
ABOUT THIS AUDIOBOOK
$15
ISBN: 9781400085767
Unabridged Download 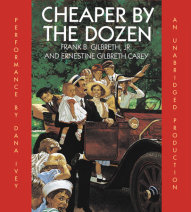