Pete Carroll is the coach of the Seattle Seahawks. He previously spent nine years as the head coach of the University of Southern California (USC) Trojans football team. Before coming to USC, he was the head coach of the New York Jets and the New England Patriots, and defensive coordinator of the San Francisco 49ers. Carroll is also known for his nonprofit organization, A Better LA, devoted to reducing gang violence in the most crime-plagued neighborhoods of Los Angeles. He and his wife, Glena, have three grown children. 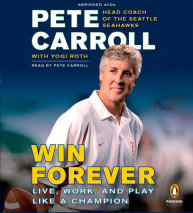 Win Forever
Author: Pete Carroll, Kristoffer A. Garin and Yogi Roth | Narrator: Pete Carroll
Release Date: July 13, 2010
"I know that I'll be evaluated in Seattle with wins and losses, as that is the nature of my profession for the last thirty-five years. But our record will not be what motivates me. Years ago I was asked, 'Pete, which is better: winning or competing?'...
ABOUT THIS AUDIOBOOK
$14
ISBN: 9781101223147
Abridged Download 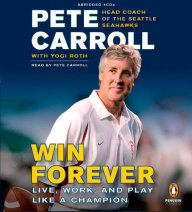 audio
The Inner Game of Tennis
Author: W. Timothy Gallwey | Narrator: Dan Woren
Release Date: January 08, 2008
An accessible, invaluable guide to mastering your “inner game” to ensure success on and off the court—part of the bestselling Inner Game series, with more than one million copies sold! “Introduced to The Inner Game of Tennis a...
ABOUT THIS AUDIOBOOK
$14
ISBN: 9780739368459
Unabridged Download