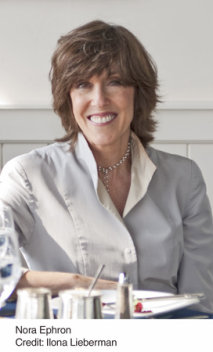 Nora Ephron was the author of the hugely successful I Feel Bad About My Neck, I Remember Nothing, and Heartburn among many others. She received Academy Award nominations for best original screenplay for When Harry Met Sally . . . , Silkwood, and Sleepless in Seattle, which she also directed. Her other credits include the hit play Lucky Guy and the films You’ve Got Mail and Julie & Julia, both of which she wrote and directed. She died in 2012. 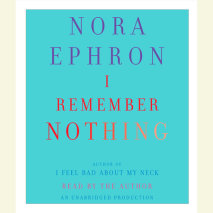 audio
I Remember Nothing
Author: Nora Ephron | Narrator: Nora Ephron
Release Date: November 09, 2010
Nora Ephron returns with her first audiobook since the astounding success of I Feel Bad About My Neck, taking a cool, hard, hilarious look at the past, the present, and the future, bemoaning the vicissitudes of modern life, and recalling with her sig...
ABOUT THIS AUDIOBOOK
$15
ISBN: 9780307879226
Unabridged Download 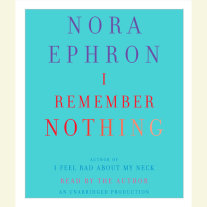 audio
I Feel Bad About My Neck
Author: Nora Ephron | Narrator: Nora Ephron
Release Date: October 24, 2006
With her disarming, intimate, completely accessible voice, and dry sense of humor, Nora Ephron shares with us her ups and downs in I Feel Bad About My Neck, a candid, hilarious look at women who are getting older and dealing with the tribulations of ...
ABOUT THIS AUDIOBOOK
$15
ISBN: 9780739342930
Unabridged Download 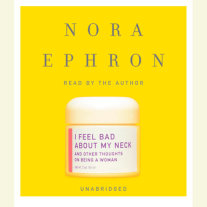