Mia Farrow is an American actress who became an icon for her award-nominated performance as Rosemary Woodhouse in the horror classic Rosemary's Baby. She was born in Los Angeles in 1945 and is the eldest daughter of Australian director John Farrow. Before she became an actress, Farrow was a model for many years. Mia Farrow is also an activist and has done extensive work as a UNICEF Goodwill Ambassador. Time magazine named her one of the most influential people in the world in 2008. Farrow has starred in dozens of movies, including John and Mary, The Great Gatsby (1974), Widows' Peak, and Luc Besson's Arthur series. 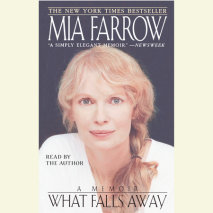 What Falls Away
Author: Mia Farrow | Narrator: Mia Farrow
Release Date: July 05, 2000
In an exquisitely written memoir, Mia Farrow introduces us to the landscapes of her extraordinary life.  Moving from her earliest memories of the walled gardens and rocky shores of western Ireland and her Hollywood childhood to her career a...
ABOUT THIS AUDIOBOOK
$14.95
ISBN: 9780553750751
Unabridged Download 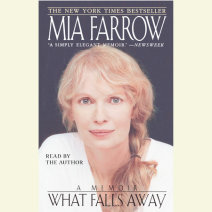