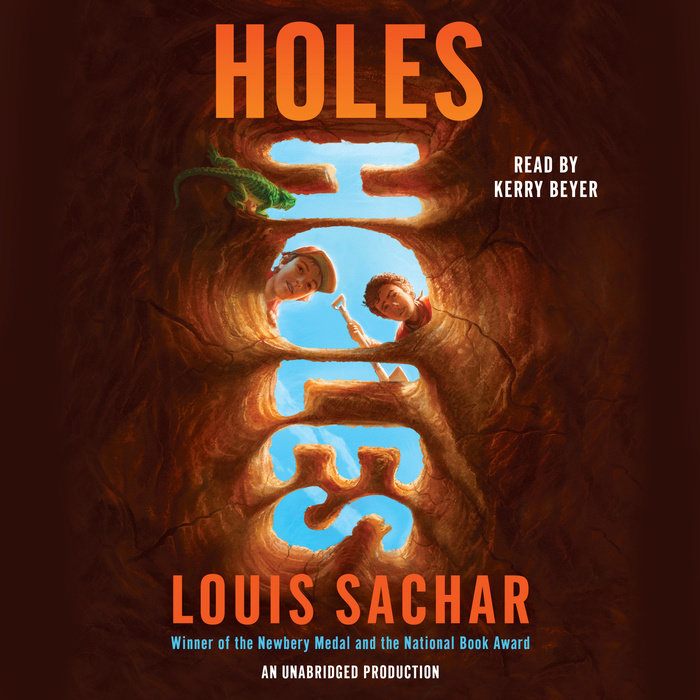 In this funny yet poignant story, a boy embarks on a personal journey that changes his life, as he spends the summer paying for a crime he didn't commit.

Stanley Yelnats, falsely arrested for stealing a pair of sneakers, is sentenced to serve time at Camp Green Lake, a juvenile detention facility in the middle of a Texas desert. Having never attended summer camp, Stanley naively believes this to be a new opportunity. He is soon faced with a group of unhappy, unaccepting campers (inmates) and an evil warden who uses the boys to dig holes in search of buried treasure.

As the summer progresses, Stanley makes some startling discoveries about himself, the true meaning of friendship, and the ancient curse that has haunted his family for generations. In a parallel story about Stanley's "no-good-dirty-rotten-pig-stealing-great-great-grandfather," the mystery of the curse is unveiled and Stanley, in his efforts to help a friend, suddenly finds himself in control of his own destiny and the fate of his unlucky family.

"I never talk about a book until it is finished. It took me a year and a half to write Holes, and I never told anyone anything about it during all that time. I do this for a variety of reasons, but mainly motivation. By not allowing myself to talk about it, the only way I can let it out, is to finish writing it.

"I write five or six drafts of each book. I start with a small idea, and it grows as I write. My ideas come to me while I'm write. The story changes greatly during the first few drafts. By the time a book is finished, it is impossible for me to say how I got the various ideas.

"I was born March 20, 1954, in East Meadow, New York. My father worked on the 78th floor of the Empire State Building. When I was nine, we moved to Tustin, California.

"I went to college at the University of California, as Berkeley. During my last year there, I helped out at an elementary school–Hillside School. It was my experience there that led to my first book, Sideways Stories from Wayside School, which I wrote in 1976.

"I attended Hastings College of the Law in San Francisco and graduated in 1980. I worked part-time as a lawyer for eight years as I continued to write children's books.

Holes is really two stories: one chronicles the unfortunate life of Stanley Yelnats and the other is a tall tale about Stanley's great-great-grandfather who meets his fate when he encounters Kissing Kate Barlow, a feared outlaw of the Wild West. Sachar's success at blending outlandish humor with poignant and heartwarming scenes makes this book ideal for reading aloud and for a novel study. Students will find satisfaction in the ending and celebrate the fact that the good guys win.

A sense of self, belonging, courage, and friendship are important themes to explore. Ideas and activities for interdisciplinary connections include the language arts, social studies, science, math, and arts curriculum.

Belonging
Stanley is overweight and considered a misfit by the boys in his school and neighborhood. Ask students to discuss why Stanley is an easy target for bullies. At what point in the novel does Stanley begin feeling that he is a part of the group? Who is the leader? How do the guys view Stanley at the end of the novel? How might Stanley be considered a hero? Involve the class in a discussion about how Stanley's heroic status might change the way his classmates view him when he returns to school in the fall.

Sense of Self
Ask students to make a list of the campers and their nicknames. Discuss the significance of each boy's nickname. Why is Stanley called "Caveman"? How can nicknames "label" people and affect the way they feel about themselves? How does Stanley's self-concept change as the story progresses? Why does Stanley call Zero by his real name when they are in the desert together? Engage the class in a discussion about how Stanley and Zero help one another gain a more positive sense of self.

Courage
Ask the class to define courage. When does Stanley begin to show courage? Have students chart Stanley's courageous acts (e.g., stealing the truck). Which other campers might be considered courageous? What gives Stanley the courage to search for Zero? Discuss which characters in the parallel story demonstrate courage. Ask students to prepare questions they would most like to ask Stanley about his newly developed courage. How might Stanley answer their questions?

Friendship
Stanley never had a friend before arriving at Camp Green Lake. Ask students to trace the development of Stanley's friendship with Zero. What are each boy's contributions to the friendship? When Stanley finds out that Zero is the person who stole the Clyde Livingston sneakers, he feels glad that Zero put the sneakers on the parked car. Explore why.

Science
Stanley's father is an inventor. Although it is said that an inventor must have intelligence, perseverance, and a lot of luck, Stanley's father never seems to have such luck. Have students research inventors such as Benjamin Franklin, Alexander Graham Bell, Thomas Edison, and the Wright brothers. How did luck play a role in their inventions?

Write a brief article for Science News about "Sploosh," the product to eliminate foot odor, invented by Stanley's father. Have students include comments from Mr. Yelnats that indicate that he has intelligence, perseverance, and finally a little luck.

Math
Zero cannot read, but he is excellent in math. Have each student survey at least 20 adults asking them whether their strength in school was reading or math. Collect the data gathered by each student and have the class construct a graph that reveals the results of the survey. Study the graph and engage the class in a discussion about the importance of both subjects.

Music
Play recordings of several ballads for the class. Ask them to compare and contrast a musical ballad and a tall tale. Divide the class into small groups. Have each pick one character from the book and write the lyrics for a ballad about that character. Ask groups to perform their ballad for the entire class.

Creative Drama/Theater
Stage a talk show with Stanley and Zero as the guests. Have the other boys from Camp Green Lake surprise them by coming on the show. What would the boys say to Stanley and Zero? What might Stanley, Zero, and the others say about the closing of Camp Green Lake? Ask Stanley to share what he learned most from his experiences there.

Careers
Stanley has always wanted to be an FBI agent. Find out the training that Stanley would need to accomplish his dream. What other types of law enforcement careers could Stanley investigate?

*"We haven't seen a book with this much plot, so suspensefully and expertly deployed, in too long a time. . . .Louis Sachar has long been a great and deserved favorite among children, despite the benign neglect of critics. But Holes is witness to its own theme: what goes around, comes around. Eventually." - - Starred, The Horn Book

*"A multitude of colorful characters, coupled with the skillful braiding of ethnic folklore, American legend, and contemporary issues is a brilliant achievement. There is no question, kids will love Holes." - - Starred, School Library Journal