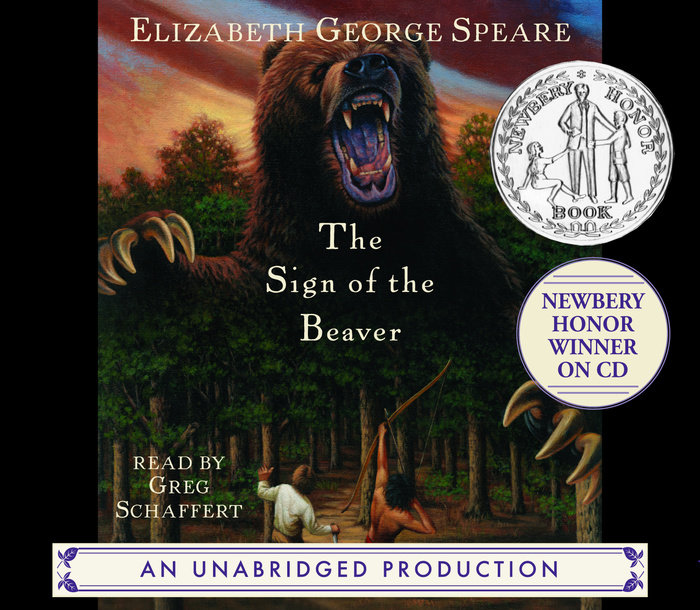 While waiting months for his father to return to their cabin in the Maine wilderness, twelve-year-old Matt is befriended by Indians and asked to join their tribe when they move north. Should he abandon his hopes of ever seeing his family again?

In the summer of 1768, Matt Hallowell and his father establish a homestead in Maine territory. When his father returns to Quincy, Massachusetts to fetch Matt's mother and sister, Matt is left alone to guard the house. One day he is almost killed by a swarm of bees, but is rescued by Chief Saknis, a Penobscot Indian, and his grandson, Attean. To repay Saknis for saving his life, Matt agrees to teach Attean to read English. At the same time, Matt is learning to become a skilled hunter from Attean. Saknis offers to adopt Matt and take him north with the tribe as it moves to new hunting grounds. Matt knows that he would be proud to be Attean's brother, but he also knows he must wait for his own family.
The Sign of the Beaver has been made into a television movie, called "Keeping the Promise," and stars Keith Carradine, Annette O'Toole, and Brendan Fletcher as Matt. It is an Atlantis Films Limited Production.

Today, there is much controversy regarding ownership of land that was once owned by Native Americans. Novels like The Sign of the Beaver may help students better understand this issue. Matt, a white boy, and Attean, a Native American, become friends in spite of their differences. Though the Hallowells are homesteaders, Matt does become sympathetic to the deep effects the settlers have on the Penobscot tribe. There are several themes to explore: survival, friendship, fear and courage, pride, gender roles, and initiation. This novel provides a natural link between the language arts and social studies curriculum; teachers may also connect Matt and Attean's story to science, math, art, and drama. The Sign of the Beaver is an excellent story with strong literary merit, making it a good book for classroom read-aloud or a novel study.

Display a map of Maine, and point out the Penobscot River. Explain to the students that Penobscot means "The Rocky Place." How is the name of the tribe pertinent to the state of Maine? Tell the class that the Penobscot Tribe in The Sign of the Beaver leaves their central village during the winter. Ask the students to discuss why the tribe must move with the seasons.

Survival -- Matt survives in the Maine wilderness for about six months. Divide the class into small groups and ask them to discuss the skills Matt uses to survive. What did Matt's father do that helps Matt survive? What beneficial skills does Matt Learn from Attean ? What does Saknis provide? What does Matt learn from the women of the tribe? What does he learn on his own? Ask the class to discuss whether Matt could have survived on his own without the help of Attean and his grandfather.

Friendship -- Matt and Attean do not form an immediate friendship. At what point do the two boys become friends? Ask students to select passages from the book that signify the developing friendship of Matt and Attean. Which boy needs the friendship the most? Have students write a journal entry that Matt might have written on the day that Attean leaves with his tribe to go to the winter hunting ground.

Fear and Courage -- There are times in the novel when Matt is quite fearful. For example, a stranger comes into Matt's cabin and takes his father's gun. Matt is left without protection. Ask students to identify other times that Matt appears fearful. Matt might also be called courageous. How are fear and courage closely related? Ask students to discuss whether they think a person has to experience fear before they can show courage.

Pride -- Both Matt and Attean accomplish tasks that make their families proud of them. Have students identify and dramatize the scenes from the book that illustrate how pride is expressed by each of their families.

Gender Roles -- Invite the class to compare and contrast Attean and Matt's views regarding man's work and woman's work. How do their beliefs reflect a cultural difference? Perhaps students would enjoy interviewing several people from other cultures. How do their cultures regard the roles of males and females? Prepare the interview, either on tape or in writing, to share with the class.

Initiation -- Fourteen-year-old Attean and thirteen-year-old Matt are on the verge of becoming adults--initiation into manhood. Attean is considered a man, and is entitled to hunt with the adult men when he finds his "manitou." Matt's culture does not have such a rite of passage to determine his entrance into manhood. At the end of the novel, he is considered a man because he has accepted his responsibility as a part of the family. Send students to the library to research other cultures and their views regarding a child's initiation into adulthood.

Matt accepts the task of teaching Attean to read. The only book that Matt has to offer Attean is Robinson Crusoe, a novel that is entirely too difficult for a beginning reader. Ask the class to discuss how they would go about teaching Attean. Remember that Attean cannot read English at all. Consider, also, that people read best when they are interested in the subject. Make a book that Matt could use in teaching Attean.

Social Studies -- Critics have complemented Elizabeth George Spear on the authenticity of her historical novels, particularly The Sign of the Beaver. Speare attributes the accurate historical facts to her thorough research. Have students record the aspects of the novel that Ms. Speare would have had to research.

The Penobscot Indians originally inhabited the part of the United States that is now the state of Maine. Send students to the library to identify other Native American tribes that originally lived in the New England area. How are the Peobscot Indians related to the Algonquins?

Science -- Matt's father tells him that there were no bees in America until the colonists brought them from England (p.22). Ask students to find information that verifies this fact. Students might also want to research the appropriate first aid for a bee sting.

The Native Americans had to depend on herbs and plants for their medicines. Encourage students to research some of herbs that they used to heal people. What is a person who practices medicine with herbs called today?

Math --How does Matt keep track of time? Ask students to relate his method of keeping time with early forms of math.

Art -- Both Matt and Attean give detailed instructions for making various domestic objects. Ask students to carefully read the directions that the boys give for making instruments for survival, living shelters, or other items. Then, have students draw these items or construct replicas.

Drama -- Ceremony and drama has always been important in the Native American culture. Dramatize one ceremony that the Penobscot Indians might have performed.

The vocabulary in The Sign of the Beaver is really very simple. Students may wish to focus on Attean's developing vocabulary. As he learns more English, he begins to make fun of some of the expressions that Matt uses. What are some of the phrases that he thinks are humorous? Ask students to share some humorous expressions that they or their family use.

"A sturdy, never faltering story of wilderness survival." -- Kirkus Reviews
"The story has flow and pace, good style, and that careful but unobtrusive research that marks the best historical fiction." -- The Bulletin
"Distinguished in style and compelling in narrative force. . . As usual in Mrs. Speare's novels, each word rings true." -- The New York Times Book Review