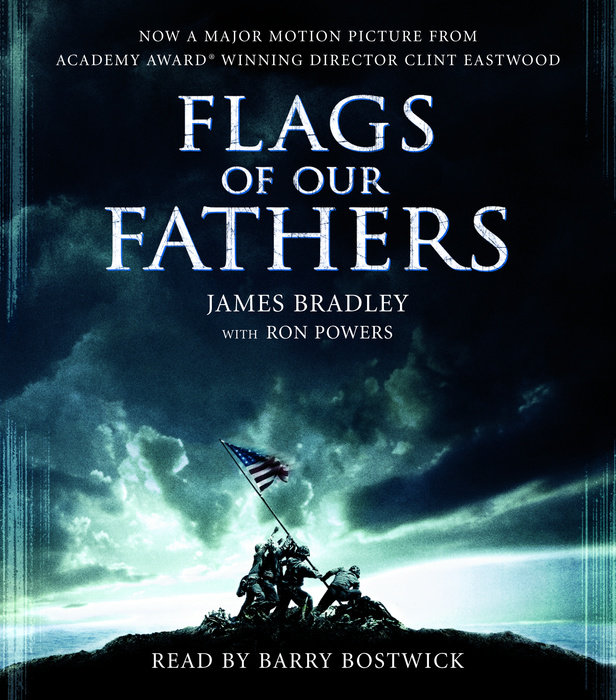 Flags of Our Fathers

In Flags of Our Fathers, author James Bradley has captured the triumph, the heartbreak, and the legacy of the six young men who raised the flag at Iwo Jima. Determined to learn more about his own father’s role in this historic event, Bradley conducted more than 300 interviews and used extensive primary source photographs and articles to uncover the histories of these courageous men and the realities of what they and their comrades experienced in a brutal battle on a tiny island thousands of miles away from their small-town American homes.

Plot Summary & Comprehension Questions
The discussion and writing section of this guide divides Flags of Our Fathers into reading assignments approximately 50 pages in length based on theme, a brief plot summary, and questions for use in classroom discussion, research, and writing.

Reading Assignment #1: Chapters 1 & 2 – Sacred Ground, All-American Boys
James Bradley introduces the battle of Iwo Jima and the six flagraisers photographed on Mt. Suribachi along with his own reasons for writing this book – to find out more about his father, one of the six flagraisers. The author introduces the backgrounds of the six all-American boys--who, taken together, form a cross-section of America at that time.

Questions:
Do the six boys each represent America prior to and at the time of World War II? If so, how? Why or why not? In the biographies presented of each boy’s family and pre-War life, do you feel that you get to know them? What is most telling?. The author is determined “to bring these boys back to life [and] to let them live again in the country’s memory.” How is this process begun in these early chapters of the book?

Reading Assignment #2: Chapters 3 & 4 – America’s War, Call of Duty
James Bradley outlines the history of America’s War in the Pacific during World War II, and touches upon points in Japanese history and Japan’s mindset towards war. Important characteristics of this war are defined, such as amphibious warfare, the tactic where Marine Corps troops disembarked onto Pacific islands from ships to assault the enemy, and Bushido, or the “Way of the Warrior,” a Japanese code of honor that taught the Japanese to fight to the death for their emperor. After receiving his draft notice, Jack Bradley enlisted in the Navy and soon became a Navy Corpsman. By the end of the chapter, all six flagraisers are transferred to a special unit of the Marines to begin a year of extensive training.

Questions:
How did the training of and beliefs of the Japanese warriors differ from those of the American Marines? What propelled the six flagraisers to enter the armed forces? Did they do it for the flag and for country or more personal reasons? Was their action heroism or “common virtue”?

Reading Assignment #3: Chapters 5 & 6 – Forging the Spearhead, Armada
On November 11, 1943, vigorous training began at Camp Pendleton for the six future flagraisers and thousands of other Marines. During this time, the boys learned to worship the rifle and would become one interdependent unit whose duty was to forge ahead while looking out for each other. The group, named Spearhead, shipped out of Pearl Harbor on the USS Missoula and sailed toward Iwo Jima expecting to land on February 19, 1945 – D-day. The Japanese, under the leadership of Lt. Gen. Tadamichi Kuribayashi, hoped to cause an extreme number of American casualties in order to sway the American public against continuing the war. The defenses they built on Iwo Jima in support of this goal were daunting––an underground city with an extensive series of underground tunnels––and would make this the bloodiest and most costly battle of the war in terms of lives lost and injuries.

Questions:
How does the author enhance the chronicle with primary documents, quotes, pictures, and passages? How is the clash of cultures between the American Marines and Japanese fighters exemplified? How would these manifest themselves when the two groups of fighters faced each other in the brutal battle for Iwo Jima?

Reading Assignment #4: Chapters 7, 8, 9, & 10 – D-Day, D-Day Plus One, D-Day Plus Two, D-Day Plus Three
James Bradley uses detailed accounts from scores of interviews to describe the events of the first horrific days of battle for the Marines at Iwo Jima. On the first day of battle, 566 men were killed, 1,755 wounded, and 99 suffered combat fatigue. Easy Company, in which the flagraisers served, turned toward taking Mt. Suribachi, the volcanic mountain that overlooked the whole of the island and offered a key vantage point for its occupier. By the end of D-Day plus three, the Japanese inside Mt. Suribachi – as well as the American Marines outside of it – were killed in record numbers.

Questions:
What images, events, and people made the strongest impression on you while reading about the first days of battle? Why? How do they symbolize America’s war in the Pacific? What motivated the Marines to fight on and inspired their incredible feats of valor in the heat of battle
Activity: Have students write their impressions of war before beginning Flags of Our Fathers. After reading these chapters, have students write their impressions of war again. Ask students to compare and contrast their reactions before and after reading the detailed chapters of the Battle of Iwo Jima.

Reading Assignment #5: Chapters 11, 12, & 13 – “So Every Son of a Bitch on This Whole Cruddy Island Can See It!”, Myths, “Like Hell with the Fire Out”
Two flagraisings marked the conquering of Mt. Suribachi after four long days of battle. The second flagraising, the replacement flagraising, is captured in the celebrated photograph of six boys hoisting the American flag in the wind. The photograph instantly became a sensation in the United States, and news articles often romanticized the Iwo Jima and flagraising experience. Myths abounded, but back at Iwo Jima, the fighting continued. Mike, Harlon, and Franklin were killed on Iwo Jima island in the ensuing days. The fighting finally ceased on March 26, 1945. Of the 22,000 Japanese defending the island, 21,000 died and an astounding 26,000––of the 80,000 Marines who went ashore––were killed or wounded.

Questions:
Have students research and bring to class news articles or photographs from the battle of Iwo Jima or the War in the Pacific. First have students summarize what they found. Why did they choose the article? Is it an accurate account based on the knowledge gained from Flags of Our Fathers? How does the media affect domestic and world events? Which is more powerful in affecting world events – people, government, or media?

Reading Assignment #6: Chapters 14, 15, & 16 – Antigo, Coming Home, The Mighty 7th
James Bradley interrupts the chronological tracing of the lives of the six flagraisers with a closer look at his own father’s efforts to forget Iwo Jima, The Photograph and the fame that went along with it. One way that John Bradley tried to achieve this was by refusing interviews and maintaining a self-imposed silence about the events. The Photograph brought America heroes and hope, and The Treasury Department sought to use its romantic image to raise funds for the war effort in a 7th Bond Tour. The surviving flagraisers were toured across the country, raising millions of dollars, and coping with the after effects of the battle.

Reading Assignment #7: Chapters 17, 18, 19, & 20 – A Conflict of Honor, Movies and Monuments, Casualties of War, Common Virtue
Upon their return, the surviving flagraisers face challenges and hardships. Ira suffers from alcoholism and eventually dies at the age of 32. Rene suffers from frustration as he grapples with his and his wife’s need to capitalize on the fame of being a flagraiser. John Bradley continues to maintain his silence, and is the only flagraiser to have a “normal” lifespan, passing away in 1994. In 1949, John Wayne stars in the Sands of Iwo Jima, which included the real-life flagraisers in scenes at the end of the movie; this casting was a public relations move. Sculptor Felix de Weldon sculpts The Photograph into America’s memory by building a bronze statue of the Mt. Suribachi flagraising. The monument was unveiled in Arlington National Cemetery on November 10, 1954.

Questions:
According to Flags of Our Fathers, what motivates young men to such valor? Who are the true heroes of Iwo Jima? What does it say about the war, the men, and our country that the only name on the statue in Arlington National Cemetery is that of the sculptor? What lessons can be learned from Flags of Our Fathers?

Essay Topics
Group Research--Flags of Our Fathers offers a vivid picture of the American role in the battle of Iwo Jima and opens the door to studying more about America’s War in the Pacific. Divide the class into teams of World War II researchers. Topics may include: Japanese History from the Meiji Restoration until 1941; America’s Homefront; Japanese Americans during WWII; Pacific Propaganda; the dropping of the Atomic Bomb on Hiroshima and Nagasaki; Pearl Harbor, and more. Students should research their topic, write essays and present their findings with their teams.

Flagraising in the 21st Century--Many news stories compared the flagraising at Ground Zero in New York City after the September 11th terrorist attacks to the flagraising at Iwo Jima. Have students compare and contrast the two flagraisings--the events surrounding each photograph, the people, the hope the act inspired--using newspaper articles and printed interviews.

Using the Web – Have students visit www.jamesbradley.com and www.iwojima.com for an in-depth look at documents, films, stamps and photos of Iwo Jima. Teachers and students may use this site as a resource guide or as an in-class learning tool for some of the projects in this guide.

Interdisciplinary Activity – The flagraisers’ letters offer a unique opportunity for the English and Social Studies classrooms to work simultaneously. Using at least three pieces of evidence from Flags of Our Fathers, have students re-create a Marine’s letter home from the perspective of one of the six flagraisers. At the same time, students in the social studies classroom can practice their internet and library researching skills to find letters written during the War in the Pacific by other military personnel. Students should share their findings in groups. Students can discuss many possible topics – such as the effects of the letter on themselves, on society, and on history.

Monuments – Have students examine the concept of monuments, a crucial ingredient in remembering history’s lessons. Prior to research, have students discuss the following questions: What is the purpose of a monument? What elements should be incorporated in a monument to commemorate events in history? Students can research existing monuments to learn more about motivation, message, and the use of historical data in building monuments. Have students create their own monument for The War in the Pacific with a rationale for its construction, elements to be included/excluded.

Flags of Our Fathers is an exceptional addition to any social studies classroom as Bradley presents the true story behind the immortal photograph that has come to symbolize the courage and indomitable will of America. Teachers can use this work in multiple ways as they demonstrate the work of a true historian while enriching a World War II or American History curriculum. The chronicle can also be used alongside an English curriculum focusing on identity and valor, the difference between truth and myth, the meaning of being a hero, and the essence of the human experience of war.