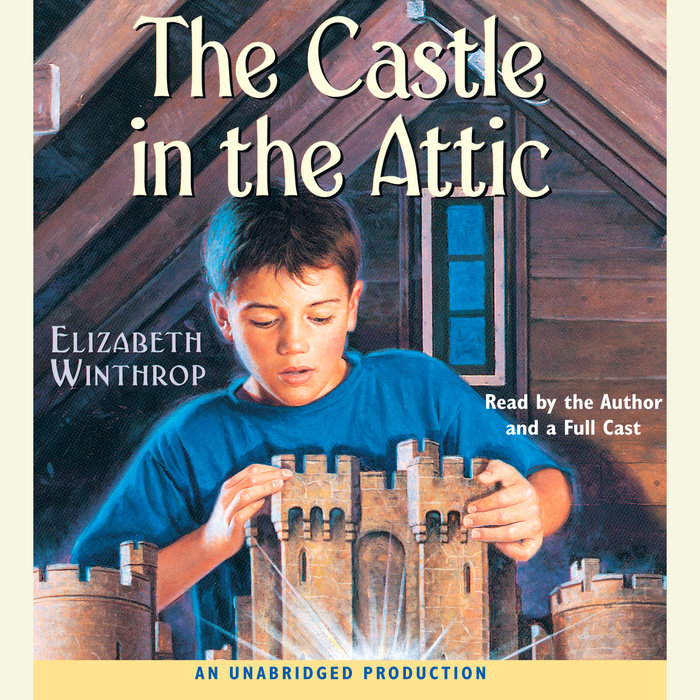 The Castle in the Attic

The Castle in the Attic
Elizabeth Winthrop

The Castle in the Attic and The Battle for the Castle are stories of courage and trust, growing up and family. The element of fantasy, the sense of adventure, the fast-moving plot, and the very real characters make these books an ideal choice for a novel study or read-aloud. Even the most reluctant readers will be drawn to the courageous quest of the main character. This guide offers activities for using these novels to connect language arts, social studies, science, the arts, and careers.

William finds magic in his toy castle and embarks on a journey that helps him understand the true meaning of courage.

In The Castle in the Attic, Mrs. Phillips, the housekeeper who has cared for William since he was born, decides to return to England to be near her family. As a parting gift, she gives William a beloved toy castle that has been in her family for generations. The castle, which is placed in William’s attic, seems mysterious and strange. As William plots a way to keep Mrs. Phillips from leaving him, he discovers the magic of the castle and finds himself off on a fantastic quest to another land, where he encounters an evil wizard and a fiery dragon.

William is 12 in The Battle for the Castle and is expected to "jump the trains," a coming-of-age ritual in his town. When he is unable to gather the courage to participate in the event, he decides to prove his different type of bravery by sharing the magic of his castle with his best friend, Jason. Together they travel back to the Middle Ages and face a dangerous army of rats and their gigantic leader.

Courage and Honor— William lacks courage in real life, but he finds courage when he is faced with saving the castle. Ask students to discuss whether Mrs. Phillips knew the castle would help William find courage. In The Battle for the Castle, what does the quest to save the castle teach Jason about courage? text

Growing Up — William and Jason turn 12 in The Battle for the Castle and are expected to "jump the trains." Jason succeeds, but William doesn’t have the courage to complete the ritual. Discuss whether William is afraid of "jumping the trains" or of "growing up." Trace William’s growth from the beginning of his quest in The Castle in the Attic to the end of his journey in The Battle for the Castle. How is Mrs. Phillips responsible for his growth? Why does Deegan call William "half-boy, half-man"? (p. 103 Battle)

Family and Relationships— Ask students to describe William’s family. What is William’s relationship with Mrs. Phillips? Discuss what Mrs. Phillips means when she says, "If I go now, your mother and father will spend more time with you. You and I, we’re almost too close. It leaves other people out." (p. 13 Attic) William’s father tries to make up for Mrs. Phillip’s absence. Ask the class to discuss whether he succeeds. How is William’s family different from Jason’s family?

Trust — Have the class discuss the elements of trust in each of the novels. How does true friendship require trust? At what point in The Castle in the Attic does William realize that he can trust Jason with his secret? Mrs. Phillips tells William, "Believe in yourself and be your own spotter." (p. 68 Attic) How does being your own spotter require trust in oneself?

Introduce the genre of fantasy to the class. Have students brainstorm about works of fantasy that they have read. Discuss each book and share the elements that make it fantasy. Then, tell students to identify each of the following elements as they read the "Castle" books: good and evil, quest, magic, and the happily-ever-after ending.

Language Arts-- Mrs. Phillips reads King Arthur and the Knights of the Round Table to William. In literature, King Arthur is considered a legend. Ask the class to define legend. What do legends teach us about the past? Then, have students select a favorite episode from one of the "Castle" books and write it as a legend.

Mrs. Phillips isn’t a major character in The Battle for the Castle, but she does give William the magic token that enables him to return to Sir Simon’s castle in the Middle Ages. Have students write a letter that William might write to Mrs. Phillips when he returns from saving the kingdom.

Social Studies-- Mrs. Phillips tells William, "You have the kind of gentle soul that accepts the rules of chivalry." (p. 9 Attic) Ask students to identify the rules of chivalry that are mentioned in the book. Then, have them use the Internet and library to find other rules. Instruct them to make an illustrated rule book that might have been used with the knights in the Middle Ages.

Mrs. Phillips loves ritual and would therefore enjoy the ceremony of knighthood. Have students research the requirements for becoming a knight. What is the training? What are the duties of a knight? What is the significance of the sword in the ceremony? Ask students to find out how a person is chosen for knighthood today? Who are some people who have been knighted under the reign of the present queen of England?

Science-- In The Battle for the Castle, Gudrin teaches William about the healing powers of herbs. Have students make an illustrated chart of herbs and their medicinal uses. Which of these cures date back to the Middle Ages? Which are still used today?

Art--Troubadours and jesters often entertained the lords and ladies in the Middle Ages. Have the class plan entertainment for William and Jason on the night before they leave the castle in The Battle for the Castle. Encourage students to wear appropriate dress and to use music, dance, and other types of tricks and acts that were part of the culture in England during the Middle Ages.

Careers -- William meets different people on his quest and finds out about the many jobs in the castle. Ask students to identify the various trades and to describe what each entails (e.g., cobbler, blacksmith). How many of these jobs might still be necessary in order to operate a castle today?

William and Jason learn new words that relate specifically to castles. Ask students to identify and define such words. Examples include portcullis (p. 10 Attic) and armory (p. 11 Attic). Encourage students to find other unfamiliar words and define them using clues from the context of the story. Such words may include trowel (p. 47 Attic), and entourage (p. 104 Castle).

"The adventure William encounters in the fantasy world is intense, and his face-off with the wizard is satisfyingly dramatic." --Booklist

Castles of Britain
This site is dedicated to the study and promotion of British castles.

The Castle of Wales
This site helps students understand life in a medieval castle.