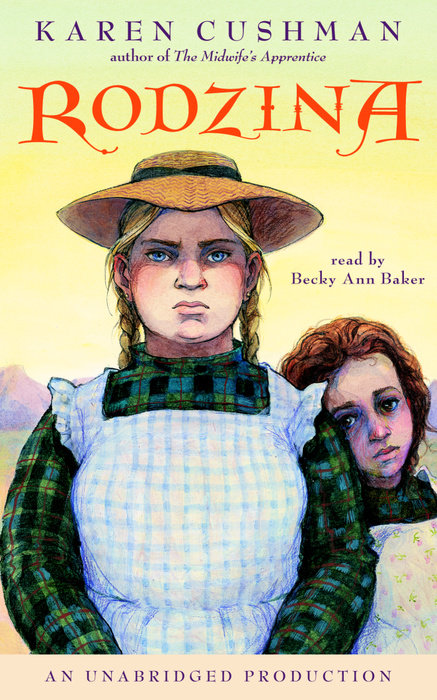 Twelve-year-old Rodzina Brodski begins a long
journey aboard the orphan train that takes her
from the streets of Chicago to an unlikely and
surprising new home in San Francisco in 1881.

Rodzina Brodski is only 12 years old when she is
swept off the streets of Chicago and put on the
orphan train that is headed west. Like all of the
street orphans, Rodzina is promised a nice family,
but she isn’t convinced that anyone will want a
homely Polish girl. The train has barely begun
its journey when Miss Doctor, the woman
accompanying the orphans, places Rodzina in
charge of the younger children. She resents this
responsibility, but manages to get through the
journey by holding on to the memories of her
family. Rodzina is placed in a terrifying situation
with a farm family near Cheyenne, and narrowly
escapes a future of doom. Her courage and spunk
lead her to the life she has wished for all along—
independence and love from someone who might
learn to care for her.

Karen Cushman was born in Chicago,
Illinois, and currently lives on Vashon
Island, in Puget Sound. She has always
been interested in history, and her desire
to know what life was like for ordinary
people in other times led her to write
Matilda Bone; Catherine, Called Birdy, a
Newbery Honor winner; and The Midwife’s
Apprentice, winner of the Newbery Medal.
Rodzina is her fifth book.

Ask students to do
their own research
and read about the
Orphan Train
Movement. Divide
the class into small
groups and ask them
to debate why the
orphan train was
considered a good
thing by some
and controversial
by others. Ask
them to consider
these points as they
read Rodzina.

Abandonment—There are children on the orphan train who aren’t orphans.
Rodzina thinks about these children, and says, “No matter how poor we were
or what trouble there was, I never felt that my mama and papa didn’t want
me.” (p. 38) How is not being wanted by one’s parents a type of abandonment?
At what point in the novel does Rodzina feel abandoned by Miss Doctor? Ask
students to describe Miss Doctor’s feelings of abandonment.

Adoption—Discuss why Miss Doctor wants Rodzina to know that Edgar Allan
Poe and Leo Tolstoy were orphans. At what point in the novel does Rodzina
“adopt” Miss Doctor? Think about the historical context of the novel, and
discuss why it is unlikely that Miss Doctor legally adopted Rodzina. Contrast
Rodzina’s fate with that of the children on the orphan train.

Survival—Many of the orphans have survived on the streets of Chicago before
they begin their journey west on the orphan train. Have students explain their
survival skills. How do these skills serve them on the train? How does Joe use
disguise as a means of survival? Ask students why they think some of the
children prefer the streets to living with a family in the west?

Family—Have students describe Rodzina’s family. How does she hold on to
special memories of them? Discuss the motive of most of the families that take
the orphans. Why does Mr. Clench want Rodzina? How does Mrs. Clench
protect Rodzina from her husband? How are Lacey, Joe, and Sammy like a
family to Rodzina? What makes Miss Doctor change her mind about sending
Rodzina to the Boys’ and Girls’ Training School near San Francisco? How do
Rodzina and Miss Doctor need each other?

Fear—Ask students to discuss why Rodzina feels that it’s important not to
reveal one’s fear. What is Rodzina’s greatest fear? How does she help the younger
children deal with their fears? At what point in the novel is the reader most
frightened for Rodzina? How does Rodzina escape this frightening situation?

Freedom—Rodzina’s family left Poland because her papa believed that “poor
freedom was better than rich slavery.” (p. 41) Ask students to think about the
fate of the children on the orphan train. Discuss whether Mr. Brodski would
consider this a type of slavery. How does Miss Doctor use the orphan train to
gain freedom for herself?

Prejudice/Bigotry—Mr. Szprot, the placing out agent, curses and screams
at the orphans. He sometimes appears especially cruel to Rodzina. Discuss
how he displays prejudice and bigotry when he addresses her as “Polish Girl.”
Ask students to find incidents throughout the novel where Rodzina suffers
from prejudices against her heritage. How is Miss Doctor a victim of prejudice
and bigotry?

Language Arts—The orphan train stops in
Cheyenne, Wyoming, where the children are fed and
entertained by local citizens. The winners of the
school spelling bee spell the following words for the
orphans: forlorn, impoverished, destitute, uncertain,
and outcast. How do these words relate to the
orphans? As a class, define these items, then instruct
students to use these spelling words and write a
brief article for the Cheyenne newspaper about
the orphans.
The children travel through little towns with names
like Dead Mule Junction, Wild Horse Ridge, Lick
Skillet, Buck Snort, and Rotten Luck. Ask students
to pick one of these names and write a legend about
how the town got its name.

Social Studies—Charles Loring Brace, the founder
of the Children’s Aid Society, was recognized for his
radical and progressive ideas about services to poor
and orphaned children. Ask students to research and
read about Mr. Brace’s ideas. Then ask them to write
an editorial either supporting or disputing his ideas
for a New York newspaper.
Ask students to read the Author’s Note at the end of
the novel. Then have them identify a bit of
information (e.g., the English boys that were sent in
1618 to work on plantations in Richmond, Virginia)
to do further research. Ask them to use their
research and write a short paper that connects this
information to the development of the current foster
care system in the United States.

Health—Myrna Clench suffers from “galloping
consumption,” and Rodzina’s mama died of the
“putrid fever.” Ask students to research the causes
and treatments of these diseases. Find out what
other diseases plagued people in the late 1800s.
Make a poster informing people of symptoms and
treatments of these diseases that a local doctor
might post to help prevention of these illnesses.

Math—Ask students to record all the towns on the
orphan train route, beginning with the first stop in
Grand Island, Nebraska. Use a map of the United
States and determine the route of the train. Then
have students use Map Quest (www.mapquest.com)
and calculate the distance Rodzina and Miss Doctor
traveled from Chicago to San Francisco.

Art—Rodzina and Miss Doctor become a family.
Have students make cards that Rodzina and Miss
Doctor might give to one another on their birthdays
in the first year they are together.
Many of the people in the
west who adopted children
from the orphan train
are farmers who live
far away from towns.
Discuss how they get
the message about
the orphan train.
Then make a flyer or
poster to hang in the
train stations along the
route that advertises the
orphan train.

“A natural for American history or social
studies classes, this is especially interesting as a
woman’s history title.”—Starred, Booklist