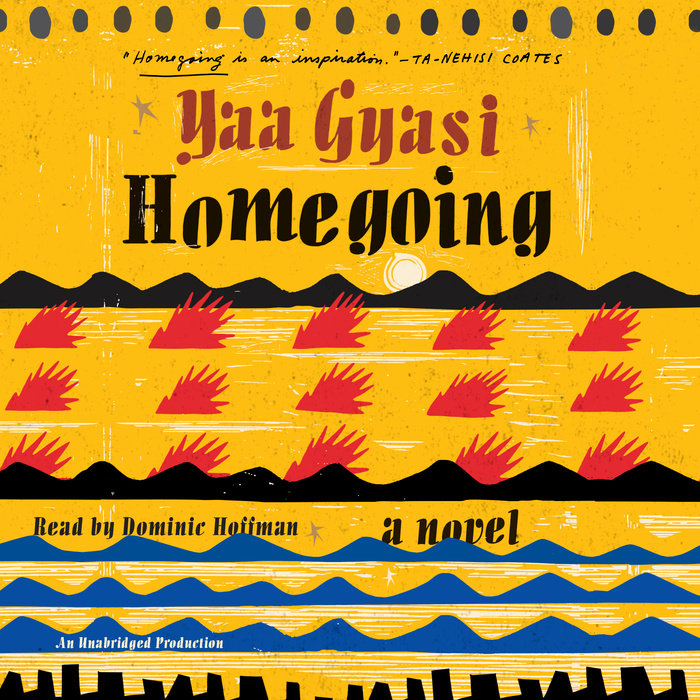 Yaa Gyasi’s Homegoing is a sweeping exploration about what happens to the descendants of two African sisters separated at birth. Told through compelling chapters that follow the generations, the novel creates many opportunities for considering the legacy of enslavement for those of African descent. Teachers can be successful in their study of the novel by taking time to carefully equip students with a factual understanding of the African continent, particularly of western Africa. Supplementing discussions with supporting nonfiction texts will also lead to a more robust, lasting understanding of the enduring legacy of enslavement.

Supporting the national Common Core State Standards (CCSS) in reading literature for high school curriculums, Homegoing is an appropriate selection for grades eleven and twelve in language arts or and world history classes. At the college level, the book is appropriate for composition and literature classes, race studies, gender studies, global studies and is also ideal for first-year/common reading programs.

In the following “Examining Content Using Common Core State Standards” section of this guide, the prompts provide for a critical analysis of Homegoing using the CCSS for Literature for grades eleven and twelve and are organized according to the standard they primarily support. In addition, at the end of each standard and the corresponding prompts, a classroom activity is provided that will enhance analysis of the text.

For a complete listing of the Standards, go to: www.corestandards.org/the-standards

Determine two or more themes or central ideas of a text and analyze their development over the course of the text, including how they interact and build on one another to produce a complex account; provide an objective summary of the text.

Several characters continue speaking African languages (Ma Aku, Ness) even when punished by white slaveholders. Others, like Marjorie, know Twi and speak it to remain connected to her grandmother in Ghana. What is the importance of the “mother tongue” for characters?

Consider the rites of passage that prepare young women for marriage and the characters who are most impacted by these decisions (Effia, for example). What does the adherence to beliefs about puberty, marriage, and other decisions suggest about cultural values, gender, and personal choice? What is the relationship between tradition and choice?

Marjorie travels back and forth between Alabama and Ghana, feeling “I don’t fit here or there” (p. 278). Analyze the ways she attempts to forge connections to her identity as Ghanian-American and how that complex identity helps us understand the complexity of identity. How does receiving the necklace from her grandmother help to ground Marjorie’s idea of home?

Explain how characters either continue or reject the legacy of colonialism. In that analysis, think, too, about the role of agency: which characters are able to reject colonialism (i.e., Quey and James), and which are not (i.e., Effia, etc.), and the significance of those abilities.

How do characters grapple with the longstanding impact of race and racism? Consider the impact of interracial marriage and sexual assault on characters. What are the physical and internal scars characters carry? Discuss the consequences of these scars.

How do characters practice resistance in the novel? Analyze the characters who were physically enslaved (Ness, H), and ones who were attempting to escape mentally (James, Willie), and still others who lived in fear of being enslaved after escaping to freedom (Kojo). What conclusions can be drawn about the importance of resistance in the face of difficulty?

In an interview with the Guardian, Gyasi said one of her goals with Homegoing involved “trying to trace the trail of trauma reinvented.” That trail begins early in the novel, as Effia lives in Cape Coast Castle above the dungeons that hold the enslaved. A place Effia explains, where “all beasts were ascribed worth” (p. 25). How does Gyasi’s statement establish an understanding of how humans were devalued and how does it also help to think about the lasting impact of enslavement? Link to article: https://www.theguardian.com/books/2017/jan/08/yaa-gyasi-slavery-is-on-peoples-minds-it-affects-us-still-interview-homegoing-observer-new-review

Consider Maame’s loss of her children and also when Esi realizes she would “learn what it meant to be un-whole” (p. 42). Other women are separated from their children, while others, like Esi, who feels a sense of loss when she learns she has a sister. What do these instances suggest about the impact of loss and familial separation on women and their children?

Analyze the moment of negotiation between Abeeku and James Collins for Effia’s hand in marriage. James Collins pays “thirty pounds up front and twenty-five shillings a month in tradable goods to Baaba as a bride gift” (p. 15) for Effia. What does Abeeku’s final decision suggest about the role of women in this community? How does Abeeku leverage Effia’s beauty and what does his willingness to do so help us to understand about the relationships between women, beauty, and economics?

Reading Homegoing will be a meaningful experience for students if they know about the rich history of Africa before the Atlantic slave trade began. Additionally, taking time to confront stereotypical representations of the continent will help students interrogate their own assumptions. The “Resources” section provides several ideas for helping students construct a nuanced understanding of the African continent that will encourage deeper reading. Teachers might begin with a visual representation using How Big is Africa? This image foregrounds the breadth of the continent. Additionally, studying maps creates appreciation of the impact of colonialism and viewing images of the actual Cape Coast Castle in Ghana will provide a concrete framework for the setting. These introductory activities allow for discussion and analysis of some of the broader themes of the novel while also building requisite background knowledge.

Gyasi provides a family tree in the front matter, and teachers might spend time studying it with students. Given the large number of characters, having students assign an image or symbol to each character can help them trace familial lineages and organize the characters as they read. Additionally, bookmarking the family tree allows for frequent reference as students read the text. Spending some time analyzing and discussing the epigraph can also provide a complementary introduction for students in preparation for their reading.

The text is ordered into two distinct parts, each containing sub chapters that lend themselves to pre-reading and smaller units of study. Teachers might select one or two chapters to acquaint students with Gyasi’s voice, ideas, and themes. These short chapters are ideal for close reading and mentor texts and as prompts for students to do their own writing.

How is the necklace related to one of the central ideas of the novel? Collect examples that demonstrate the theme and summarize the relationship between the symbol and the theme. Then, use that analysis to have a structured discussion about the use of the necklace and its contribution to the story’s meaning and aesthetic impact.

Analyze the impact of the author's choices regarding how to develop and relate elements of a story or drama (e.g., where a story is set, how the action is ordered, how the characters are introduced and developed).

Determine the importance of setting parts of the novel in Cape Coast Castle and character interactions that happen within the castle. Focus especially on the distinction between those who live above the dungeons and those who live in the dungeons. How does the setting establish a mood for the novel? How does the mood change throughout the novel based on the characters and their positions within Cape Coast Castle?

As the child of Effia and James Collins, Quey finds himself struggling to decide where he belongs. Described as “half-caste,” Quey “could not fully claim either half of himself, neither his father’s whiteness nor his mother’s blackness. Neither England nor the Gold Coast” (p. 56). Quey also has interactions with Cudjo that cause him to question his own sexual identity development, but his father sends him to England in an attempt to separate the two. When Quey and Cudjo are reunited, Quey buries his feelings and instead enters an arranged marriage. What is the impact of Gyasi’s choices for Quey on understanding what it means for him to come of age?

Ma Aku is “still dreaming of the country she’d been ripped from years and years before” (p. 113). What is the significance of these dreams? What do they suggest about the impact of being forcibly removed from a place? How does Ma Aku help complicate understandings of “home”?


Sonny is arrested several times because of his community organizing work in New York. Finally, he succumbs to drug addiction and blames his mother for what he perceives as her weakness for not fighting for anything. His mother counters that she made the ultimate choice: her son. How does this affirmation impact Sonny’s image of himself?

When H is freed at the end of the Civil War and then forced into prison labor, he struggles to remember his life as a free man. During his time working in the mines, he “could hardly remember being free, and he could not tell if what he missed was the freedom itself or the capacity for memory” (p. 162). Analyze the significance of the tension H feels between memory and freedom.


Discuss the moment Willie sees Robert with his new family on the streets of Harlem and decides to forgive him. How would you justify her decision and her subsequent ability to begin singing in the church? Do you agree with her decision to forgive Robert?

Yaw harbors anger toward his mother. When he finally confronts her (p. 239), Akua tells Yaw the story of the necklace, connects him to his heritage, and counsels him, “you have to let yourself be free” (p. 242). Evaluate the importance of this moment for Yaw and his mother, particularly as related to Yaw’s ability to forgive his mother. What does it mean for Yaw to be “free”?


Examine Akua’s continuous dreams of the Fire Woman and the murder, her exile in her hut, and the eventual killing of her children. Why did Akua kill her children? Discuss the connection and the significance between the events, Akua’s role in them, and the recurrence of fire throughout the novel.

Consider how the novel is organized. What is the significance of beginning with Effia and ending with a reunion between Marjorie and Marcus? How does this structural decision impact the novel’s organization? What impressions does it leave on the reader?

Many characters are grounded in actual historical events. Students can select a chapter and a character and conduct research on the event(s), drawing comparisons and extending connections between historical accounts and the novel. Students can present their findings via a Google slide show, a Padlet presentation, a podcast, or another interactive option.

Yaa Gyasi: “Slavery is on People’s Mind. If affects us still.” Interview, The Guardian (online). https://www.theguardian.com/books/2017/jan/08/yaa-gyasi-slavery-is-on-peoples-minds-it-affects-us-still-interview-homegoing-observer-new-review

Other Works of Interest

About This Guide’s Writer

Dr. Kimberly N. Parker currently works in New Teacher Development at the Shady Hill School in Cambridge, MA. She taught English in a variety of school settings for sixteen years, is the former president of the New England Association of Teachers of English, and is the former Secondary Representative-at-Large for the National Council of Teachers of English. Dr. Parker holds a Ph.D. in Curriculum and Instruction from the University of IllinoisUrbana-Champaign.