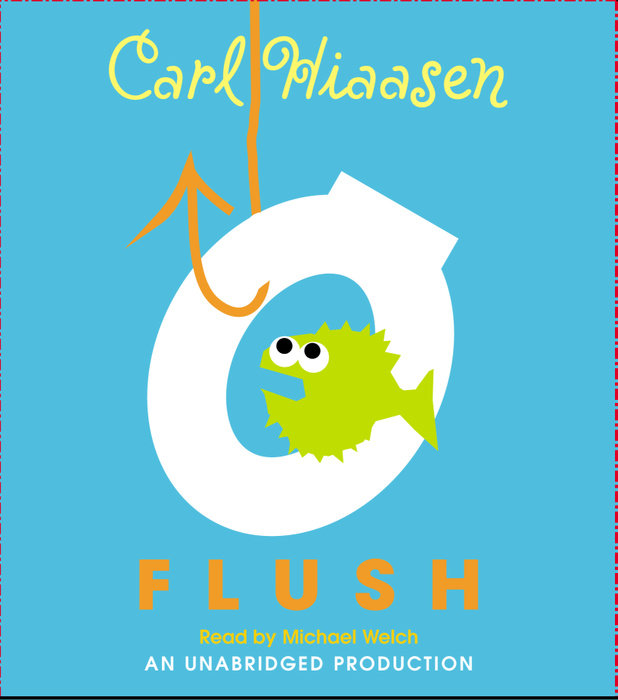 Florida Keys residents Noah Underwood and his younger sister, Abbey, embark on a wild and humorous journey to help their father expose the shady operator of a casino boat.

Noah’s father, Paine Underwood, is in jail for sinking the Coral Queen casino boat because its operator, Dusty Muleman, is illegally dumping sewage into the ocean. This isn’t the first time that Paine has been arrested for taking local environmental issues into his own hands, nor the first time that Dusty Muleman has fooled the sheriff, the press, and even the Coast Guard. When Paine asks his son to help expose Dusty, Noah enlists the help of his younger sister, Abbey, and Shelly, an exbartender who has the goods on Dusty. With the timely help of a mysterious old pirate, these unlikely allies manage to pull off Operation Royal Flush–proving that it’s Dusty who belongs behind bars.

Carl Hiaasen was only six years old when his father recognized his interest in writing and gave him a typewriter. After graduating from the University of Florida, Hiaasen became a general assignment reporter for the Miami Herald. Now he writes a regular column for the paper and bestselling satirical novels about environmental issues and crooks of all persuasions. Hoot, Hiaasen’s first novel for young readers, was awarded a Newbery Honor.

Have students write a brief description about the Key West Sanctuary for a travel magazine. Include information about special programs to protect it.

FAMILY–How are Noah’s parents “polar opposites”? Abbey thinks her mom can’t figure out how to fix her dad: What does Donna want to fix in Paine? Compare and contrast Noah and Abbey’s personalities. Discuss how their differences make them a good team. Ask students to explain Noah’s statement, “I wanted things to be different at home, for mom’s sake, but I sure didn’t want Dad to make himself into a whole different person.” (p. 136)

FATHER-SON RELATIONSHIP–At the beginning of the novel, Donna expresses concern that Noah may turn out like his father. Cite evidence that Noah and Paine share similar qualities. Describe their relationship. Why is Paine so certain that he can count on Noah’s help? Compare Noah and Paine’s relationship to that of Jasper, Jr., and Dusty Muleman. Discuss the greatest lesson that Noah learns from his father. What does Jasper, Jr., learn from Dusty?

BULLYING–Ask students to discuss the characteristics of a bully. How has Dusty Muleman managed to bully both the sheriff and members of the Coast Guard? Name and describe other bullies in the novel. What is the best way to deal with a bully? Why does Noah keep his problems with Jasper, Jr., from his parents? Noah’s father says “fighting is for people who can’t win with their brains.” (p. 38) How does Noah defeat Jasper, Jr., and Dusty by using his brain?

SACRIFICE–Paine Underwood takes on politicians, the police, and the Coast Guard to protect the environment. He is so committed to his cause that he is willing to involve his family. Discuss how causes usually require sacrifice. How does Paine almost sacrifice his family for his cause? What would the citizens of the Keys sacrifice if Dusty Muleman hadn’t been stopped? What has Grandpa Bobby sacrificed for his cause?

COURAGE–Noah and Abbey have learned courage from their father. What is courageous about Operation Royal Flush? Donna Underwood isn’t thrilled with her husband’s actions. Have students debate whether she lacks courage, or is just tired of bailing him out of jail. How does Shelly show courage when she asks Dusty for her job back as a bartender on the Coral Queen?

VALUES IN CONFLICT–Paine says, “I’m not a common criminal. I know right from wrong.” (p. 3) Ask students if they think he’s right, and if so, why is he in jail? Explain Shelly’s meaning when she tells Noah, “Please don’t grow up to be one of those men who lie for the sport of it.” (p. 31) Grandpa Bobby describes Paine as a good man, “but sometimes his brain takes a nap and lets his heart take the tiller.” (p. 209) How do Noah and Abbey use their hearts and their brains to expose Dusty?

Connecting to the Curriculum

LANGUAGE ARTS–Ask students to discuss how Hiaasen uses character names to evoke humor in the novel. Write brief character sketches of Lice Peeking and Dusty Muleman. Discuss the symbolism of their names. Miles Umlatt is a journalist with the Island Examiner. He appears quite taken with Paine Underwood’s story. The day after Paine sinks the Coral Queen, the headline of the paper reads: “Local Cabbie Defends Sinking of Casino Boat,” and the day after Operation Royal Flush, the headline is “Casino Boat Busted in Pollution Probe.” Ask students to select one of the headlines, and write the story as Miles Umlatt might have written it.

SOCIAL STUDIES–The sheriff places a gag order on Paine Underwood. Have students read the First Amendment to the United States Constitution, and write a brief essay that supports Paine’s belief that “even a jailbird has a constitutional right to go on television.” (p. 97) Have students research and outline the Coast Guard’s role in establishing and monitoring standards for marine environmental protection (www.uscg.mil/USCG.shtm/standards). Prepare a presentation that someone from the Coast Guard might give to Noah and Abbey’s school about the work of the Coast Guard, and how local citizens can help by reporting illegal operations.

SCIENCE–It is the job of the local health department to monitor shoreline pollution warnings. Discuss what happens when the biologists find too much bacteria in the water. Ask students to use books in the library or sites on the Internet to find out the health risks of swimming and fishing in polluted water. Make a brochure that Noah might make to describe the health risks caused by water pollution at Thunder Beach.

MUSIC–Donna Underwood listens to vocalist Sheryl Crow sing a song called “My Favorite Mistake.” She jokes that she could have written the song about Paine. Locate the lyrics to the song on the Internet. Then ask students to write additional lyrics that Donna Underwood might have written about her husband.

DRAMA–Paine Underwood looks straight into the Channel 10 cameras and says, “I sunk the Coral Queen as an act of civil disobedience.” He goes on to call Dusty Muleman a “ruthless greedhead.” Dusty’s lawyer challenges Paine to prove his “reckless and slanderous allegations.” Have the class stage a mock trial where Paine is charged with vandalism and civil disobedience. Include character witnesses that represent both sides.

Kids Health: For Kids
www.kidshealth.org/kid/feeling/emotion/bullies.html
This site focuses on dealing with bullies.

The Nature Conservancy
http://nature.org/
The official website of the Nature Conservancy whose mission it is to preserve the plants, animals and natural communities that represent the diversity of life on Earth by protecting the lands and waters they need to survive.